Hi!  I’m starting a new series on Beautiful Noise that I’m calling “Sorting out the Noise”.  I know it may not be particularly newsworthy or noteworthy, but I wanted to start sharing some of the things that have worked for our family.  And there’s the fine print- this is not to say that these will work for your family, but they have worked for us and might be worth a shot for yours!

Today’s subject is eating.  This has been a major topic around our house, for a couple of reasons.  Speedy is having trouble keeping on weight or gaining weight, in large part due to his current medication.  Eating has caused him great anxiety, and this may very well be due to the immense attention we’ve paid to how much and how well he eats.

Wonder Boy is five, and either due to sensory issues or the fact that every five year old on the planet seems to be stuck on chicken nuggets dipped in ranch dressing, his repertoire is rather limited.  Don’t worry, he also eats peanut butter sandwiches and plain pasta.  Super nutritious, right? 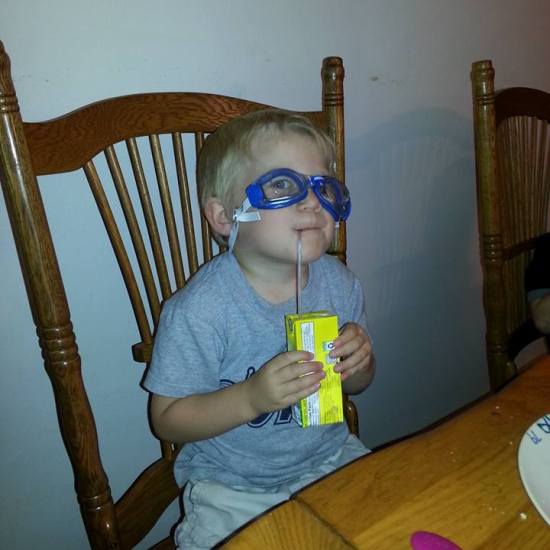 When the teenagers were this age, I remember their doctors telling me that it’s okay if a child eats chicken nuggets at every dinner for a year straight.  And they might have been right, from a medical standpoint.

Frankly, I’m sick and tired of cooking several different dinners, as is my husband.  Yes, you heard right, he cooks.  In fact he cooks more often than and better than I do.  I’m no dummy, I don’t enjoy cooking as much as he does.  He also bakes killer apple pies.  I married smart.

Back on track, kiddo, back on track.  Eating.  So we spent about an hour yesterday at Speedy’s school, meeting with a dozen of our closest friends (just kidding, they are all his teachers and special education specialists and so forth.  We adore them madly, mostly for dealing with what we cannot for six hours every day). A major discussion was his eating, and we shared with them our strategies and they shared theirs.  I know for a fact that we’re not the only family dealing with this, so it was time to send the love your way.

Speedy’s 1:1 Aide told me that she realized that the cafeteria was too noisy for him to be able to focus on eating, so they began eating in the OT room.  Then she noticed that he was still getting distracted looking around at everything, so she gave him headphones and the iPad, and put on his favorite music.  So far, this has worked. He listens to songs while eating, and is able to filter out visual distractions as well as background noise.

At home, on the days when he’s dragging out the meal and saying he’s getting full, we began to make a game of it.  I told him we were going to assign a name to each bite.  The only rules are that we always start with the letter “A”, and move through the alphabet with each subsequent bite.  A is always for Abernathy, because mommy is tired and needs a break from thinking.  For reasons even I am not aware of, this is apparently a reasonable name to assign to the first letter (the way my brain works).  As we come up with progressively sillier names, the food gets eaten and the “full” is forgotten.

For Wonder Boy, it’s been a matter of trying new things (when I have the energy) followed by a preferred food.  As I wade through my old photos, I found evidence of him eating bananas and carrots in addition to pasta, peanut butter, and chicken nuggets.  Carrots have recently come back into the regular lineup, because he has returned to mouthing non-food items.  Sadly, he has chewed through a great many things which are not meant to be eaten, and so our first line of defense is to meet the sensory need at mealtime. 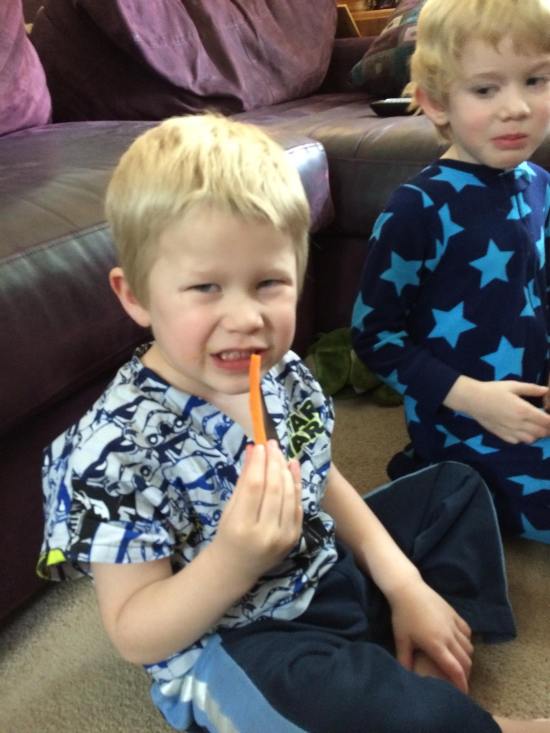 I suspect that the strictness of diet is probably typical for five year olds.  Remember- I haven’t raised a “typical” five year old in 14 years.  Since I often struggle to remember my own name due to pure exhaustion, you can see how I might be a bit hazy on the details of what typical kids need.  Anyway, we’ll keep trying to introduce foods, but in his heart he will probably always be hooked on carbs.  I can’t say that I blame him.